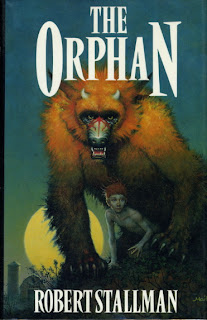 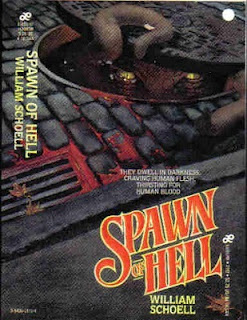 When you’re a young fan of horror, there’s not much choice; at least, there wasn’t much choice when I was growing up. In the 21st century, you can order horror novels off the internet - which you’d think would be cheaper, but instead you’re paying fifty to eighty dollars for a book about giant monster crabs, because in ten years it will fetch a big price at the Las Vegas Monster Crab Book Convention. But I digress.
There wasn’t much at the regular bookstore; horror is never a big draw. Also, new books were and are expensive, and that was before the advent of the small press. No monster crab and zombie collectibles, just an American price on the spine above a much higher Canadian price.
Faced with exorbitant prices and and little choice, the discerning (desperate really) horror fan had to go the second-hand route. Where on Earth could you go? The United Cigar Store, on Barrington Street in downtown Halifax. Nova Scotia.
This place is so obscure that I can’t find a picture of it on google; I looked. It sold cigarettes and cigars (I think it did, anyway), and the rest of the store space was devoted to second-hand books and magazines. There was the obligatory rack of old porn mags (Hustler, Oui, Gallery, and Juggs, which should have been called Hard-Up Women with Back Problems ), and if I knew my horror history then like I do now, I would have taken a peek at them to see if I could find an old Stephen King story.
It was/is the most normal-looking store. Dirty old tile, bright trashy lights, soft drinks and bags of chips up front, a small rotating rack of bestseller hardbacks that had probably been bought at the bookstore in Scotia Square a block over. The bestsellers and candy were a beating heart with the dead and lost books a dying corpse around it.
Some odd things about this place: It had two racks side-by-side, one full of identical copies of the killer-bee disaster novel, The Swarm(Arthur Herzog), and the other full of identical copies of the psycho killer-whale thriller Orca (also by Arthur Herzog). I have no idea why they had hundreds of copies of these two books, or why they didn’t just junk them all. Those stupid books stayed there for years and years. 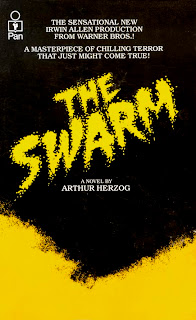 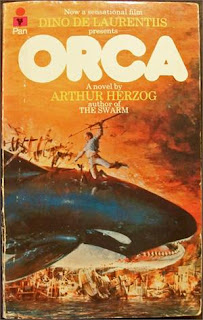 The other racks had regular, non-identical second-hand books, and a wonderful horror selection. The lovely schlock I waded through when I went to that place! For one of my birthdays a friend of mine just gave me a stack of random novels he bought in bulk from that store. I loved it, because the horror rack in a second hand store is like a beach full of flotsam and old condoms, with treasure buried somewhere beneath. 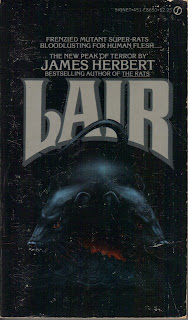 What did I find there? All the old James Herbert rat-apocalypse books (The Rats, Lair, and Domain), the classic Incubus, by Ray Russel (which I’ve written about), a wonderful coming-of-age werewolf novel called The Orphan, by Robert Stallman, and an absolutely enraging piece-of-shit called Spawn of Hell (William Schoell), which was about strange slug creatures with the faces of their victims’ relatives grafted  onto their heads. I re-read Spawn of Hell whenever I wanted to get mad.
The United Cigar Store is still there. The incongrous racks of identical Herzog novels are gone, thanks to the 21st century business climate. But a lot of the old second-hand books (the horror in particular) are still there. I would guess that a few of them have not been touched in twenty years. They’re probably lousy with bedbugs and crumbling to acidic dust, although I like to think they’re still there, fine but just a little faded, waiting to be picked up for a buck or two.
If you’re ever in Halifax, that store is still there, and still in the most central location in Halifax. It’s mainly second-hand, but a lot of stores in Halifax are second-hand. There is a huge second-hand bookstore in the AT&T mall at the corner of Spring Garden and Barrington, and it looks far more dusty and decrepit than The United Cigar Store, if you are so inclined. You can go to these places, or you can go to the wonderful and impossibly ancient Lawrence’s Books here in Vancouver, and see the strange and wondrous world of things that people gave up because they had to move, spring-clean, make a few bucks, get divorced, or clean out a house after a death.
The inarguable weight and size of books, their tendency to rot and smell, make them automatically antique and obsolete before their time. There were second-hand bookstores long before ebooks, and they have always been places where the slightly oddball among us have come to search for things others might not have valued.
The second-hand books will moulder as we buy less physical books. Second-hand stores are going to disappear, and the only thing left will be the typical box of 50-cent paperbacks at the Goodwill or the small-town antique store.
So if you see a second-hand store, go in. Look around, remember. No one will make a second-hand store for second-hand bookstores.
Posted by Mac Campbell at 23:06