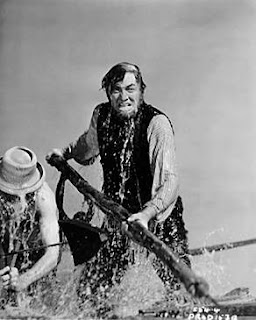 A few years ago, I got the urge to read fancy books. I’m not sure why I did, but it was a good idea. I read Middleamarch, Ulysses, all the novels of Martin Amis, the four main books of JM Coetzee, a lot of Iris Murdoch, some Aldous Huxley, and a huge helping of Doris Lessing, who I think is one of the finest and most visionary writers of the 20th century.


A lot has been written about this book. It is not boring. The final three chapters are the finest action writing you’ll ever read and that’s a promise. Stephen Spielberg took those three last chapters and made a movie about them, only he made the whale into a giant Great White shark.


Aside from the whale, that central character of the novel, who only appears at the end, there is Ahab, the most driven man in all literature. He becomes the novel’s main thrust as he chases Moby Dick, who can be seen as a massive phallus, a destructive egg, or the force of destiny, death itself. The whale is inevitability, destruction, a force that will forever beat you even as you pursue it and proclaim your victory.


At one point in Moby Dick, Ahab gets his fortune told. He is told that he will die from being hung by the neck. Ahab rejoices, for it means that he will be executed on dry land, and thus the White Whale will never kill him.


In the great climax of the novel, he plunges his harpoon into the whale and the rope attacked to the harpoon loops about his neck, pulling him into the water with the force of a runaway train. Surprise!


What if you’re a supremely powerful leader who has held onto power for more than forty years? You’ve hired Mariah Carey to sing for your son’s birthday. You’ve engineered massive acts of terrorism and gotten away with it. All around you are countries saddled with unshakeable and brutal dictatorships.


Would you ever think you would meet your end covered in blood, publicly thrown upon the hood of a truck in the middle of the day, while fifty hysterical young and armed men throng about you?


This happened to Muommar Gadaffi. He was shot minutes later, and then his body was taken to a strip mall and tossed into a commercial freezer so the citizens of Libya could take a look.


I’m not at all sympathetic. This is what happens to men and woman who rule. A lot of English royalty were taken from their castles into a public square and beheaded. Mussolini was killed and tossed into a heap of other bodies as the Italian public filed by.


But we are human, and somehow we are engineered to think that the bad thing, that happens to people just like us, will never happen. This time it’s different, is what we say. It’s what we said about the housing bubble, it is what Gadaffi said about himself even as the rebels closes in on the city of Sirt, it is what Steve Jobs said when he began treating his cancer with internet cures. This time it’s different. This is what has driven the plot to a million stories, real and fictional.


For the most part, we’re going to die unpleasantly, without dignity, with a thousand untended regrets.


But all the manoeuvring and denial is entertainment. It’s what makes life interesting. It’s how we are.


So the next time you think of death, don’t get discouraged. Nothing will change, but by all means, try to defeat death. Pursue it and try to beat it. You won’t succeed, but what a story you’ll make with your efforts.
Posted by Mac Campbell at 12:04