8 Things I learned from my Graveyard

I live near an enormous graveyard. Have you ever walked through and thoroughly examined a large graveyard? Mine has a Masonic section, mausoleums, a Jewish section, a Buddhist section, a stream and garden sprinkled with stones engraved with the names of dead babies, three separate veteran sections, and a brand new crematory wall. It does not have a pet section, which is too bad since I and so many other people walk their dogs there among the stones.
Things I have learned since living by a graveyard ten blocks long.
1. If you want people to remember you, choose your gravestone wisely. Too many buy gravestones made of concrete. Crushed seashell is an ingredient in concrete, and the acid in rainwater will eat into your gravestone, reducing your engraved family name to a pale, near-invisible grouping of moss-eaten depressions. Soon your gravestone will be bleached and almost smooth. If you want your gravestone to moulder away as would a body, then fine. But otherwise, invest in either marble or granite. I’ve seen granite stones than I’ve thought were brand-new but upon reading the dates realized they were well over a century old. 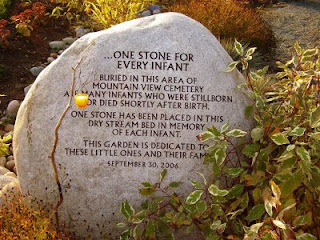 2. A very few graves are those of recently-dead children. Those graves are covered with festive balloons, little toy trucks, and colorful cards that proclaim the toughness and heroism of the child, who usually had a rough life in the intensive care unit being treated for something congenital. Often the gravestones are covered in stencilled cartoon Supermans, or Winnie the Pooh and Eyore. Don’t avoid these graves. You can see them a long way away. I visit one or two on a regular basis, sometimes with my own children. These kids faced death much more bravely than we ever will, and we shouldn’t cast our eyes away.


3. Don’t walk by the crematorium when the gas main is hissing. A good crematorium will use air scrubbers, but that sweet smell still makes its way to your nose.


4. Use graveyards. They are public green space, protected from scumbag developers, and if they were to be shunned by the public, gangs and squatters would move in. Murder victims would be left there, although I’m sure the murderers would be unaware of the irony. So walk your dog there, jog there, take the kids on walks through there. Think of your grandmother, and wonder whether she would want children playing in her place of eternal rest. Of course she would! I would too. Just be respectful.


5. If you’re using your graveyard for the purpose of teaching your child to ride his bike, do not do so on Mothers’ day. Mothers’ day is the busiest day of the year outside Veterans’ day/Memorial day. It will be very crowded. 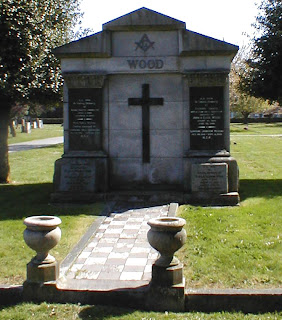 6. I don’t know who this is, but if you’re reading this: Don’t leave food in the cemetery. Whole chickens, roasts, piles of cereal and rice, whole mountains of mashed potatoes, racks of ribs - seriously, I get that there is a creepy religious angle to all of this, but it’s still gross. Rats, seagulls, and coyote are drawn to the graveyard and they don’t go away. If you can’t help it, and still feel the need to put out perishable food in the graveyard, do it on All Souls’ Day like everyone else.


7. Learned to be open-minded. Everyone dies, everyone. Several years back, a young fellow was found in the backyard of a marijuana grow-house with a bullet in his head. His boyz left pictures of him flashing gang signs, crosses, framed photos of him and his scary friend lounging on the couch, and a small pile of joints right under his name on the crematory wall. If that is how his friends and family wish to remember him, I’ll try not to judge. At least they didn’t bring rotting chickens.
Finally - 8. If your last name is Dick, do not let your wife erect a monstrously large phallic gravestone in your name. Perhaps the woman in question wanted to world to know the secret to their happy marriage, but I didn’t need to know.
Posted by Mac Campbell at 12:54