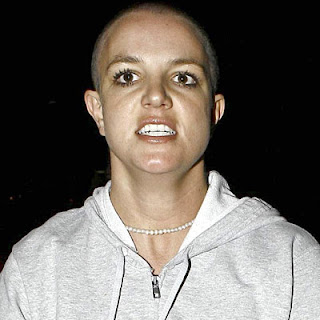 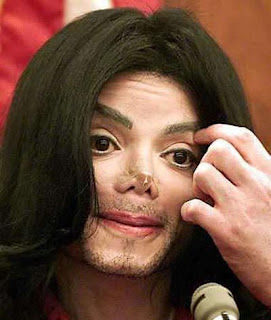 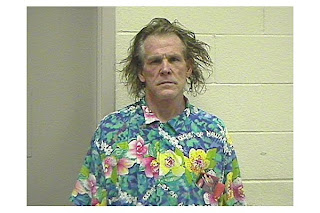 
She took an impromptu dip in the ocean, she spoke in accents, spent several months doing nothing but going to Starbucks and then driving to gas stations to use the bathroom in her bare feet, and in a final dramatic climax, shaved her head in public. She went straight to rehab and got better, but for a while she had been insane. She is the most recently renowned example of a crazy famous person, but she is not the first.


Michael Jackson had body dysmorphic disorder, as well as a whopping persecution/messiah complex. He made things worse with drugs, and at the time of his death was paying a doctor to administer surgical anasthetic so he could sleep. Throughout his life his closest friend was a chimp, who was then replaced by Elizabeth Taylor. There were the alleged sex offences, and the buying of the foetuses of  his children and the womb that bore them.  He lived a life more rarified than the most coddled of emperors'. One day someone will write The Book on that man, and we'll know: (1) - what went on in that house, and (2) - what his body looked like when he died. Come one, you're curious! He may have thought he had a one-of-a-kind gender and a one-of-a-kind ethnicity - what would he had done to his body in the name of his completely fictional self-image? What radical surgical operations could Michael Jackson have ordered for his body from the neck down? Where we couldn't see?


Mel Gibson, Nicholas Cage, Lindsey Lohan, Alec Baldwin, Kanye West, and many others. They've all shown symptoms of mental illness - bipolar disorder, outright schizophrenia, borderline personality disorder, not to mention countless addictions. Did they come to to Hollywood crazy, or did Hollywood make them crazy?


In order to answer that, first look at your typical schizophrenic. The most common symptoms are extreme paranoia and fear of persecution. Some wear hats lined with tinfoil to protect their brains from enemy microwaves. They suspect anyone with a camera or phone as a spy for an enemy agency. Some schizophrenics have travelled to other countries, and lived in vans on the side of roads, to escape what they believe is a vast conspiracy to get them. They fear people could be outside the windows, in the alleys going through their garbage, waiting outside a restaurant to get their receipt and get a record of what they've been eating.

Does this sound familiar? Of course it does! Celebrities go through the same thing every day of their lives. If a famous person walks by a television, he or she is probably on it, or being talked about on it. A celebrity has to worry if someone is going through his or her garbage. Photographers in the bushes, in passing cars, following down the street.


If you are famous, there are hundreds, if not thousands, of people out to get you. Some just want to profit off you and some dislike you. Some even love you, and these people are the worse: An overly loving fan of Robert Pattinson leapt out of nowhere and wrung his neck. He survived, but I heard a rumour that he deliberately doesn't bathe in hopes that his craziest fans are repelled by his body odour.


If you are mentally ill, you show symptoms: fantasies of paranoia and persecution. But what if you were sane, and had those symptoms forced on you? You might go crazy. The mind recognizes stress and fear, releases the appropriate defence hormones, and voila! - an A-list actress assigns speaking stones to her staff. A country western superstar dons a toupee and releases an album under a dark and dangerous secret identity that fools no one. A female pop-star writes on her website that she can turn invisible. A rap-star run for president of his homeland when he can't even speak the language. The same paparazzi who stalk you also guard you from reality.
All of this could be proven or disproven, but these people are hidden behind phalanges of security and reams of confidentiality clauses. The evidence that could fuel a breakthrough in psychiatry is protected by hundreds of millions of dollars. No one really knows the long term effects of living under a vast conspiracy of people who are out to get you. By the time a certain level of fame has been reached, the only health professionals available are the drug dealers with medical licenses. There is no specialist in Fame-induced Personality Disorder, or reverse-engineered mental illness.
So would you refuse fame to save your sanity? Think about it for a moment.
Posted by Mac Campbell at 21:55