Not the ones out now. Not those glorious, epic, artsy creations by Alan Moore and Neil Gaiman. Nothing by Garth Ennis or Grant Morrison. I'm talking about the quick and dirty Hulks and Spider-mans that you got at the corner store. These comics would never be voted into the top-100 book list in Time Magazine, like Watchmen was.


I want to talk about ads in the back of those comic books. They were something else; they were the paper equivalent of a down-market, fly-by-night carnie circus. These days, comic book ads are bought by mainstream companies. It's a big business, and I'm glad comics are now a viable product. But globalization and conglomeration have drained some of the wonderful little backwaters of North American culture. Back when I was a kid, the ad-space in comics were bought by - This is my imagination here - some guy smoking his cigar in his warehouse of crazy things he wanted to sell you. 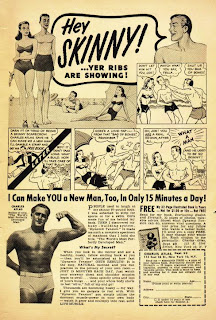 Hypno-coins to bedazzle your friends! X-ray specs to look through Stephanie Johnson's shirt! Some strange device that somehow 'threw' your voice! And SEA MONKEYS!


According to the ad, if you ordered Sea monkeys you would receive in the mail (after a 6-8 week wait) a packet of dried… stuff. You would sprinkle the stuff in the water of your aquarium, and royal family of Sea Monkeys would appear. The King, Queen, and their children would lounge about your aquarium with their golden crowns lolling on their heads.


What got me was the monster catalog. For ONE DOLLAR (plus 35 cents for shipping and handling), I bought Frankenstein's Monster. The ad promised that it would terrify my friends, that its eyes would glow in the dark at night in my room. It was SEVEN FEET TALL!


I found that ad today. When I was a little boy, I perhaps didn't read everything alongside the exciting description. Honor House, the company that sold the mail-order monsters, clearly wasn't into emphasizing the mundane truth about what they sold out of kids' comics for a buck plus shipping.


I just sent my buck thirty-five in the mail and waited what seemed like an eternity for my monster to be delivered, bolts and all, to my door. Some enemies of mine had a fright coming, and I was gonna give it to them.


The day came when a very small package from Lynbrook, New York, came to my door. Was that all? I asked myself. Surely there was some sort of mistake. Perhaps this was the monster's leash? Its food-bowl? Its remote-control panel?


I opened the package, and there was this folded piece of plastic the size and feel of a large, heavy-duty garbage bag.


I unfolded it, and found that it was a seven-foot polyethylene poster of Frankenstein's Monster. He indeed was stretching out his hand menacingly. And his glowing eyes? Along with the poster came two stickers: tiny, fluorescent orange dots which I was to affix to Frank's eyes. With the help of my dad, I glumly taped it to the bedroom wall. The folds never went away. When I turned out my light later that night, the two bright orange dots sat in the dark and did nothing.


The friends who were supposed to be frightened were not impressed at all. They poo-pooed it and demanded I get out my home chemistry set.


I was horribly disappointed; I'll make that clear. But I do look fondly back at that time. Sure, you couldn't get everything you wanted at any time. But today, I don't think there's a kid alive on this continent who would ever believe he or she would be getting a monster delivered by mail. You can read reviews about everything, see the trailers on the internet, see the individual website of each and every product you're going to buy. There little mystery anymore in being a child. It's all about access, about knowing everything because it's all there.


The newest wave in technology will be 3-D printers. They're printers that print objects, not documents. You want something? Press a button and a machine in the corner of your office will make it. Watch for them. They're coming. We'll be able to print out our kids' Christmas gifts the night of December 24th. You won't have to describe something for your son or daughter - you can just ask the internet to produce of picture or video of it, or just have it made at the press of a button.


But when I was little, I read an ad in a comic book and sent away for Frankenstein's monster. I believed it. It wasn't true, but I believed it. A while ago, there was mystery and now we no longer have it.